Paul came round the same day he was contacted and carried out an excellent job tidying the garden and removing some trees and shrubs just a couple of days later.

I was searching for someone to help get my garden ready for the summer and allow me a little more time to enjoy it! Upon meeting Paul for the initial quote, he was full of ideas and enthusiasm and to my surprise said he could start three days later.

Paul and his wing man turned up promptly in sub zero temperatures and worked with speed, focus and accuracy for two full days.

They re-did the entire rear fence, cleared substantial overgrown areas, removed one tree stump and one full tree whilst pruning the very over grown apple tree.

My entire decking was cleaned, lawn mown, shrubs and bushes trimmed, brambles stripped and every element of rubbish removed. The transformation was fantastic ..

I could not recommend Paul high enough and look forward to having him back to help advise and plant my new shrubs and flowers over the coming weeks.

My garden had become quite overgrown and I was looking for a gardening team who have all the powertools, and can take the waste away, and who also know their plants. Paul and team were the only ones I found who could do this and they did a wonderful job.

My paths have been cleaned, stumps ground, borders cleared of weeds and ivy and everything has been pruned.

Paul had some excellent ideas for other things we could do to improve the garden which I am sure I will take him up on very soon.

clearing an overgrown garden for my father

Paul did a very good job clearing an overgrown garden for my father. He worked around all the plants and shrubs so they could grow again and also ground some tree stumps to free up new space.

Most recently, he planted a new hedge - he came up with lots of ideas and then sorted out what we wanted. I'd thoroughly recommend him. Judith 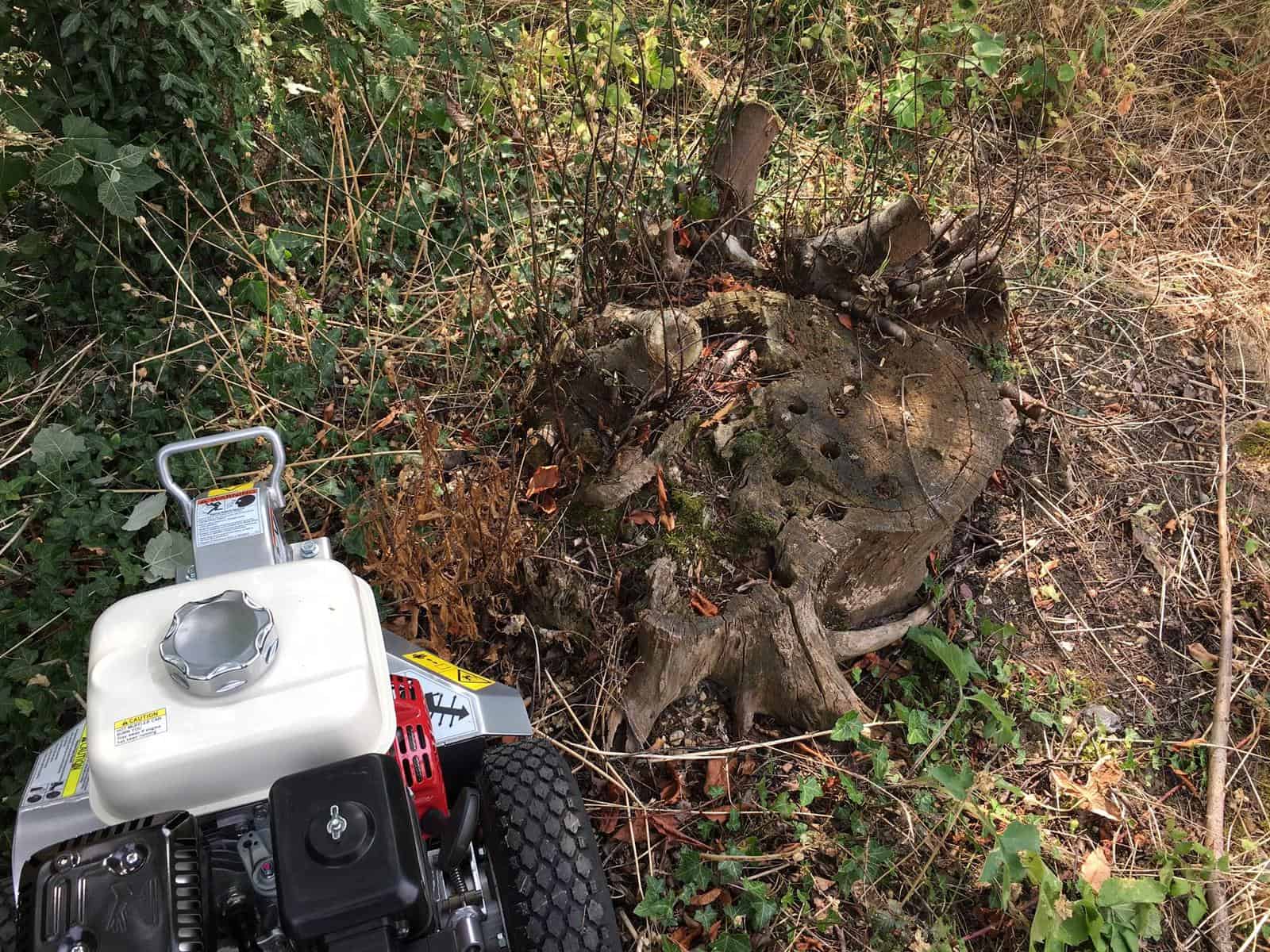 I had a large tree stump in a really inaccessible raised area, full of other overgrown shrubs/brambles/general jungle. Paul agreed to do the work on a Saturday to suit my calendar, and worked like a Trojan for a number of hours until the stump was no more. He also did a couple of small stumps/large roots that were nearby while he was there. Great job, neat and tidy, and a nice guy to do business with, I can highly recommend him.

I see he also managed to update his website with a few pictures (which don't do justice to the size of the stump, by the way) before I could even leave comment myself, which typifies his approach to getting things done.
Pete Harte (Satisfied customer)

END_OF_DOCUMENT_TOKEN_TO_BE_REPLACED

Fantastic service from Tidy Gardens
The Tidy Gardens/DGL team did a first class landscaping job for us. Edward worked incredibly hard throughout and Paul’s project management, attention to detail and design were really valuable, even when the scope of the project changed part way through.
I highly recommend them and will not hesitate to use them again for other garden projects in future!
—
You can read more about this project on our dedicated garden landscaping website – Landscaping in Caversham

Excellent service and workmanship
Tidy gardens cleared an area of garden and laid new turf with some landscaping. Did a great job as per quotation and always turned up as expected. Would use again and happy to give a recommendation.

Excellent garden service
Paul has done several large jobs for us in the garden over the last year – getting trees out, creating beds, reducing boundary tree height, fence building – and he has always provided an excellent service. He has proved to be a reliable and hard worker, and has always given us very fair prices. He’s a nice chap too 🙂

Jill C. Ascot, August 2013
I have been very pleased with the work undertaken by Paul.  It is a relief to finally find a gardener who is diligent, committed & reliable. Paul always turns up when expected and just gets on with the job in hand. It is important that you discuss your needs & requirements with Paul ideally ahead of his visit so that he is able to work without any delay. Also this makes sure that you understand how much the work will cost and how long it will take. Paul is very knowledgeable regarding plants &… END_OF_DOCUMENT_TOKEN_TO_BE_REPLACED

Highly recommended!!
My garden has been transformed to it’s former glory thanks to Paul and Co. I can’t believe what he did in such a short space of time. They left the garden spotless, I thought I might have had to rake up a few leaves at least. Many thanks and hope to see you again soon.

I had an overgrown garden where trees had merged into one. I couldn’t see where one plant started and the next one ended!

We needed help and Paul was on hand to help! We arranged a visit within a few days and fortunately Paul could fit us in just a few days after that. The end product is a thinned out space where we can now plant some small shrubs. Paul gave me some ideas about what we could plant. Paul worked tirelessly on the job and I would have no hesitation in recommending …

CHRIS - June 2019
Paul and his colleague came to my father’s garden to carry out a big tidy up. They are very hardworking and did a great job cutting back a very overgrown hedge, tidying borders, mowing and clearing away all the waste afterwards. Also great communication, emails and text answered promptly too

Excellent work !!!
Paul, Eddie and the lads are a really great team. We had a significant amount of work done in a short period. Their work rate was phenomenal. Precise work, tidy work, good communication, and a friendly team. Will be using again without a doubt.

Eddie O'Hara
June 2020. Very pleased with Paul and the Team. Garden tidy up and new turf put down. Have now used twice and will use again.

Unusual garden service
Paul provides an unusual service – he knows what he’s doing! He can identify and name most plants, especially the difference between weeds and perennials unlike several of his competitors in the area. Added to that knowledge Paul and Radek provided a good service and created a very tidy garden in a few hours. Recommended.

Landscaping, decking & path removal, new patio laid
Paul and Eddie did a fantastic job of our back garden. We had a large area of uneven ground that we needed levelling, an old concrete path to pull up and a large old decking area to remove. All done in super quick time, and a whole new paving area neatly laid. We have no access to the back, so they brought everything through the garage and kitchen every day – it was all left neat and tidy every day. They filled huge skip and carried all the slabs, hardcore etc through by hand. Paul helped w… END_OF_DOCUMENT_TOKEN_TO_BE_REPLACED

Re felting shed
Many thanks for a job well done and a fast reply sent a text on Sunday and job done on Monday afternoon thank you.

Vacancy Clear Up
Hi I hired Paul to provide an end of tenancy clear up of a back garden. His work and guidance were superb – the garden was transformed and all garden refuse removed. His quote was competitive and he worked hard to complete the job. More than happy to recommend him.

Steve
May 2020 I have used Paul and his team for quite a while they are polite very efficient and clear up after their visit I wouldn’t hesitate to recommend to anyone. I tried the rest and now found the best

September 2020. Professional, good quality work
Paul carried out removal of the existing lawn and re-laying new. He and his colleague turned up on time, carried out the work as agreed. The quality of work and materials was excellent and he kept me informed as to what he was doing, ensuring the work was being done to my satisfaction. After each day and upon completion he tidied up and left the premises clean and tidy. I would not hesitate to recommend his company.