My old Gardner was moving into a different aspect of maintenance so I looked for a replacement
I found Paul and after reading the glowing reports contacted him. He came when he said to see the garden gave an immediate quote. He returned to start the job and we had a Wedding to go to so left them to it upon returning the following day we were extremely pleased with the work done and the garden was left clean and tidy. 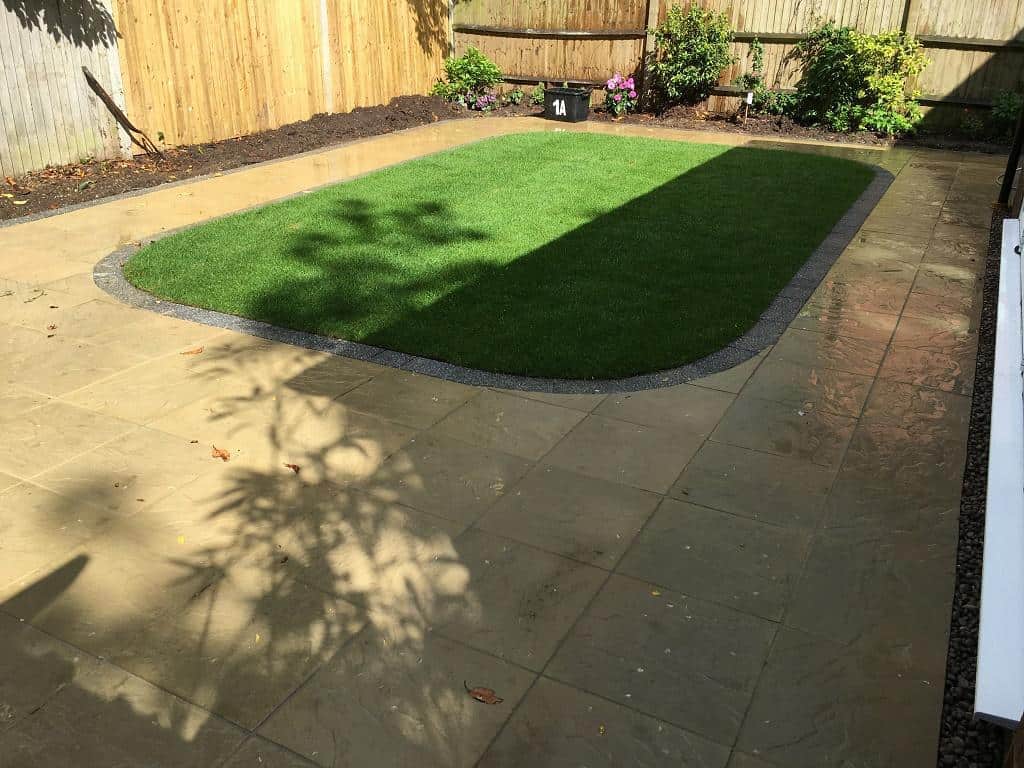 Paul, Eddie and the lads are a really great team. We had a significant amount of work done in a short period. Their work rate was phenomenal. Precise work, tidy work, good communication, and a friendly team. Will be using again without a doubt.

I reckon it's best to show some before and after photos. I also have a movie before and after so you can judge for yourself how good are work had been.
We followed a vision of an owner who knew exactly what he wanted albeit not from the very start, which caused some problems along the way.
We at Tidy Gardens would stipulate on proper thorough plan before any work is carried out. We are happy to discuss, advise and suggest our best ideas that we think will meet your desires before we start the project.

For this garden, the owners first vision was to have a semi circle pathway running between two entrances to the garden, from either side of the house. Then a large lawn area in the middle and flower beds between newly created pathway and a fence. Owners idea evolved into a patio area and another line of flags to be added along the house. Ultimately the lawn area was closed inside a small ellipse.

There's still planting to be done, which the owner wants to do himself.

And the same video after landscaping has been done

Majority of landscaping work was done in the back garden, as shown on photos above. However, we have also been asked to shrink the front flower bed, therefore extend the driveway to accommodate 2 cars. It's been done using same paving blocks to match the existing driveway.

Here's what the driveway looks like after our landscaping work.

If you are looking for a landscaping company for landscaping work in Reading, then why not give us a call or drop us an email

Very efficient and tidy work at a good price.

Paul and his colleague attended within the time stated to fell a tree that was beginning to interfere with my nieighbours house. They even grounded out the stump so the ground was levelled off.

All arisings were cleared away to leave the garden clean and tidy.

Job was done so quickly and well that they also picked up some work from my neighbour too.

Does not need to improve

Requested a garden tidy last week. Paul and his team arrived on time yesterday and within a day had transformed an overgrown garden to something presentable. Would highly recommend

END_OF_DOCUMENT_TOKEN_TO_BE_REPLACED

Refreshed Pathways and Borders
Paul, together with his equally hard working friend, replaced our pathways and borders (as seen in ‘Lets not beat about the bush’. They worked very hard and I was extremely pleased with the result. I waited to write my review because I wanted to see what would transpire throughout the different seasons with regards to the plants. The borders have filled out nicely and the pathways still look new. I wouldn’t hesitate to recommend Paul and would happily call on him again for any further work.… END_OF_DOCUMENT_TOKEN_TO_BE_REPLACED

First class job! Really pleased!
We would highly recommend Paul as we are so pleased with our front garden. He provided an efficient, knowledgeable and professional service where we were very happy with the end result and all at a very reasonable price! Thank you Paul

Carly, Caversham, Reading, November 2013
Our little jungle had the local cats pretending to be tigers in the long grass but Paul managed to address this in a jiffy! He is punctual and professional- a pleasure to have around I can’t recommend him enough!

Great impact on my garden
After I had neglected our large garden for several months, I hired TidyGardens to come and sort it out. They quickly made a great impact on the garden, cutting no corners. After a little over a day’s work I can now enjoy our garden again. I have asked TidyGardens to maintain the garden for me on an ongoing basis so I don’t let it get overgrown again.

Paul transformed my very overgrown garden into a manageable and welcoming environment. He along with his co-workers were exceptionally hard working, pleasant and knowledgeable, offering good advice to me.

The work was completed to a high standard with rubbish removed and pavements washed. I have absolutely no hesitation to recommend Tidy Gardens who were also very price competitive. Thank you for all your hard work!

Jill C. Ascot, August 2013
I have been very pleased with the work undertaken by Paul.  It is a relief to finally find a gardener who is diligent, committed & reliable. Paul always turns up when expected and just gets on with the job in hand. It is important that you discuss your needs & requirements with Paul ideally ahead of his visit so that he is able to work without any delay. Also this makes sure that you understand how much the work will cost and how long it will take. Paul is very knowledgeable regarding plants &… END_OF_DOCUMENT_TOKEN_TO_BE_REPLACED

Great service and very happy customer!
Paul came around quickly as promised to give us a quote and provided exactly what we wanted at a great price. Fast, friendly, professional service and tidied up everything very well. We were also given advice/tips on how to maintain the garden and improve its appearance. Recommend using this company and we will use them again in the future!

Fab job
Just to say thank you to Paul for doing a really great job for me, for a good price and at short notice on the weekend before Christmas – was able to put my light up afterwards and it looks awesome. Thanks again Paul! 🙂

This company has worked alongside ours in delivering an exceptional Grounds Maintenance service in difficult circumstances on a housing estate in Reading.

Over a period of a year the team have systematically improved the environment by making suggestions to our client and fulfilling them when approved.
They have regularly and efficiently attended the site and took ownership of their work whilst building a relationship with the key personnel involved.
I would like to thank them for their co… END_OF_DOCUMENT_TOKEN_TO_BE_REPLACED

March 2018. Job well done
We asked Paul to come and tidy our very overgrown garden. He did an excellent job. He is hard working, professional and well priced. We would definitely recommend him and may even have him back for further work in the future. Big thanks

We have used Tidy Gardens for fortnightly grass cutting and general garden maintenance, for well over a year now.

They are reliable and ready to advise on all aspects required. Highly recommended.

Great work on difficult hedges
Paul and colleague did a superb job trimming back a long run of mixed bushes that had been in place over 30 years. We wanted them cut back in size for easier trimming, and Paul first advised us what to do and warned us how it would look for a few months until the leaves grew back. We were very happy with his advice and the end result, and the great way they cleared everything up afterwards leaving the garden very neat and tidy. Now it’s up to nature to complete the transformation! We would recom… END_OF_DOCUMENT_TOKEN_TO_BE_REPLACED

Margaret
Paul made a lovely job of cutting our hedge. We found him reliable and tidy. He will be our first choice in all our garden work from now on.

Professional, personable, good quality work
Paul carried out some work on my property today. It was a relatively small job (extending a path using paving stones) which took him and his colleague about a day to complete. He and his colleague turned up on time and then proceeded to carry out the work as agreed. The quality of work was excellent and he kept me informed to what he was doing, to ensure that the work was being done to my satisfaction. After completion he tidied up and left the premises neat and tidy. I would not hesitate to con… END_OF_DOCUMENT_TOKEN_TO_BE_REPLACED

Steve
May 2020 I have used Paul and his team for quite a while they are polite very efficient and clear up after their visit I wouldn’t hesitate to recommend to anyone. I tried the rest and now found the best

Hedge trimming, May 2014
Paul was able to give us a competitive quote and complete the work shortly afterwards. I was delighted to come home to see the garden looking so much better and all the waste taken away.

Front lawn landscaped
Paul recently re-landscaped my front lawn. He removed so serious hard to get tree stumps, levelled out the ground, relaid the lawn and finished off by doing some pave edgings for some rose bushes. The quality of his work was really good and he even started the work on the Easter Monday Bank Holiday. I have already recommended him to my brother and will do the same to those who ask who did the work. Excellent work by a polite and friendly chap.

New look - garden landscaped
We moved recently and the small garden was very overgrown. However, with the help of Paul and Eddie we now have a completely renovated garden with new patio areas, lawn and flower beds. We are so pleased with the result. Paul and Eddie worked tirelessly and were extremely professional. Paul is quite knowledgeable about plants and garden design and they both took great pride in their work. We would definitely recommend them.
Please have a look at the video of this project