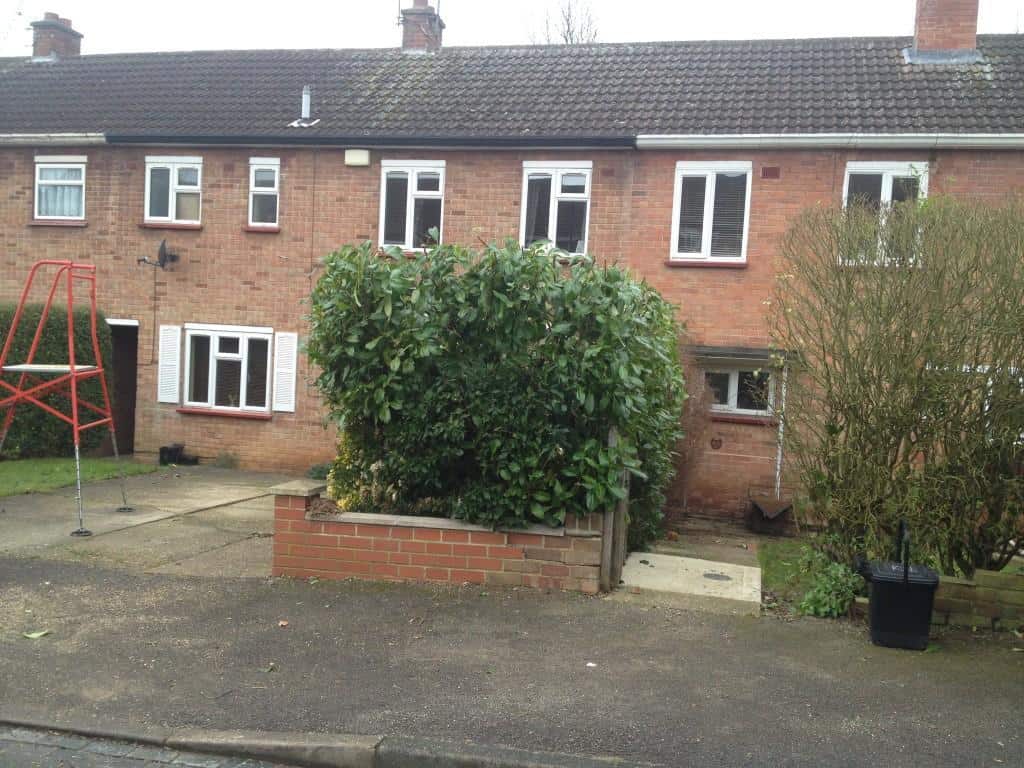 Laurel hedge, cut long overdue..
and it wasn't raining for a change! 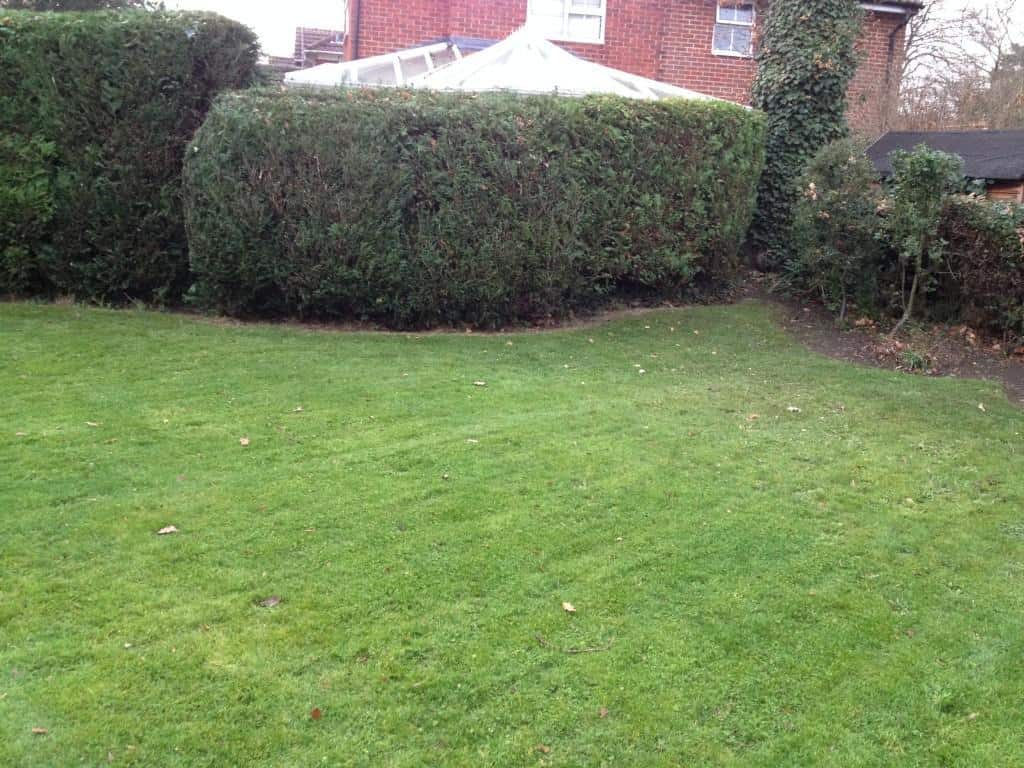 No rest for the wicked! but no complaints really..

Another weekend wasted NOT!

A nice tidy up and hedge trim in this much loved and tendered garden in Bracknell, although hedges could do with a bit more frequent cut..

Here's a testimonial received from the client. 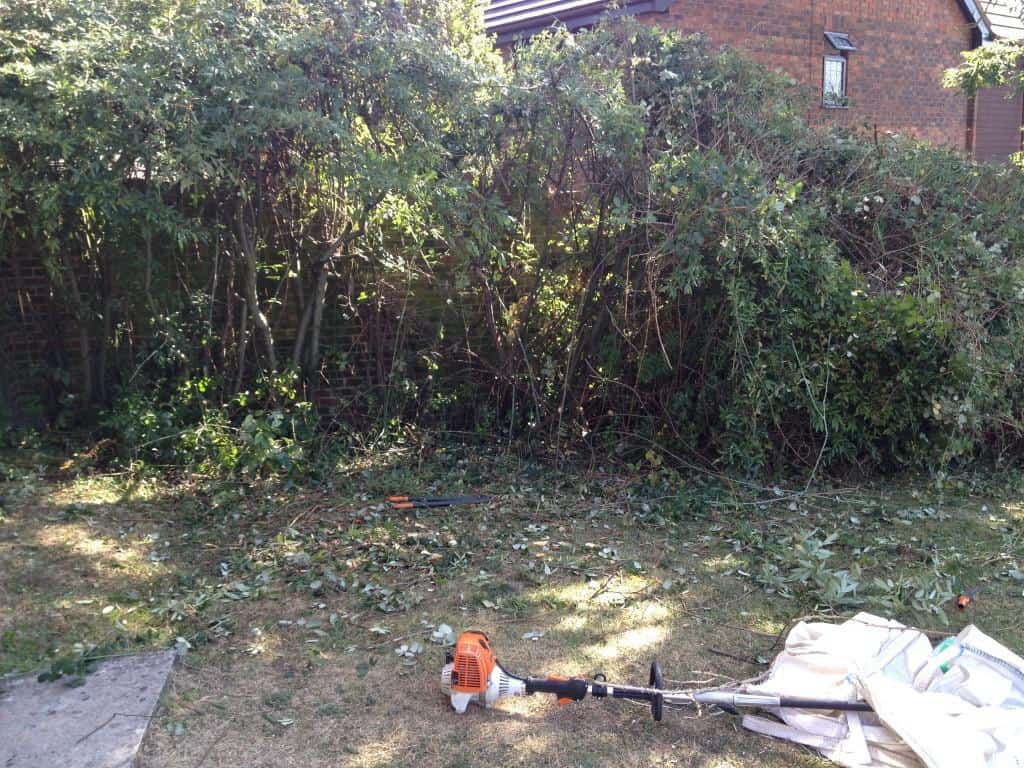 Front garden in Lower Earley. Cotoneaster along the brick wall taken over by some wild roses, brambles and other thorny foes

Hedge work: Few of cotoneasters had to be removed ( right hand side ), some had been given a chance to survive..

Back garden in the same house.

Another cotoneaster in an awful state. Covered in weeds, brambles etc.. Customers wished for it to be removed and site cleared for a fruit tree.

Another part of this garden has been cleared. Pictures here 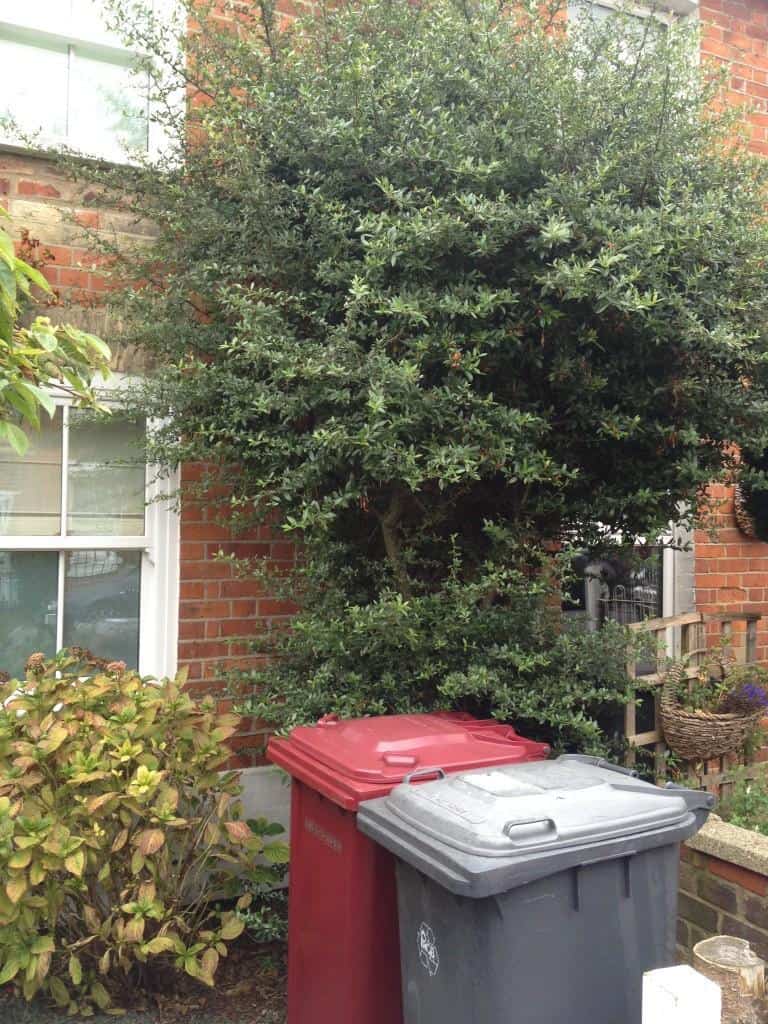 Residents complained about that tree which has outgrown its space in this tiny front terraced house garden.
Tree reduction done 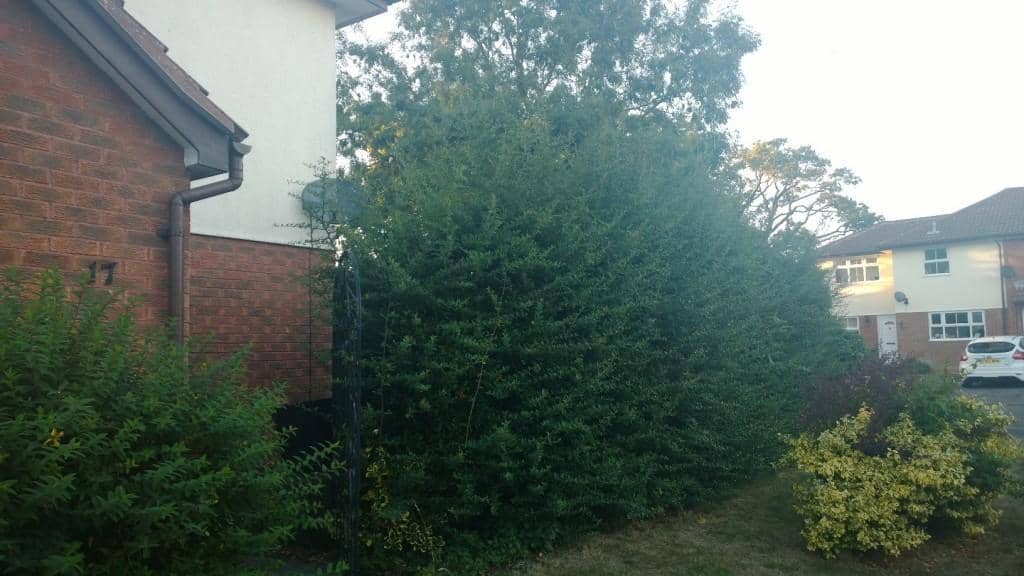 Trimmed and height reduced by  about 0.5m
The biggest challenge ? How to shift it without touching it !
Pyracantha as the common name suggests bears long and very sharp thorns.
Luckily I pulled this off with no serious injuries

END_OF_DOCUMENT_TOKEN_TO_BE_REPLACED

Garden Makeover - March 2017
My garden has resemble a wasteland for several years. Paul and Eddie started work on it early on Monday morning and by Saturday afternoon they had transformed it into a lawn, neatly edged with brick paving, with a flower bed at the rear ready for new plants. They carried on working through terrible weather and left everything clean and tidy when they’d finished. They are reliable, helpful, hard working and very polite and I can highly recommend them. I have already asked Paul to do more gardeni… END_OF_DOCUMENT_TOKEN_TO_BE_REPLACED

Excellent job!
Thank you, our jungle now looks like a garden again! Paul was hardworking and clearly takes pride in a job well done. Looking forward to enjoying the garden now Paul and team are on board to do regular maintenance.

Great work on difficult hedges
Paul and colleague did a superb job trimming back a long run of mixed bushes that had been in place over 30 years. We wanted them cut back in size for easier trimming, and Paul first advised us what to do and warned us how it would look for a few months until the leaves grew back. We were very happy with his advice and the end result, and the great way they cleared everything up afterwards leaving the garden very neat and tidy. Now it’s up to nature to complete the transformation! We would recom… END_OF_DOCUMENT_TOKEN_TO_BE_REPLACED

Excellent garden service
Paul has done several large jobs for us in the garden over the last year – getting trees out, creating beds, reducing boundary tree height, fence building – and he has always provided an excellent service. He has proved to be a reliable and hard worker, and has always given us very fair prices. He’s a nice chap too 🙂

January 2017. Good Job, well done.
Paul and his colleague had their work cut out with our very overgrown garden. Turning up promptly at the time they said they would, they cracked on and very soon had cleared the ivy, brambles and nettles that had taken over. They also trimmed two mature and large hedges as well as mature shrubs and gave the patio area a very thorough weed and clean. All the waste was swept up and taken away. I could not have asked for any more from them – Thank you both very much.

Fantastic garden make-over
We needed both the front and back garden to be made ready for a house sale. Tidy Gardens fulfilled my brief and more, adding extra tidying without being asked. Flower beds were dug over and weeded, and even pots ( with no plants) were cleaned, the AstroTurf swept, shrubs were trimmed and an obsolete tree removed. We couldn’t have asked for a better job and in the rain too. Both gardens look fantastic. Highly, highly recommended.

Lauren
September 2019 Highly recommended! Very professional and courteous service. Was able to be flexible to my needs. Did a thorough job and I’m looking forward to working with them again!

Carly, Caversham, Reading, November 2013
Our little jungle had the local cats pretending to be tigers in the long grass but Paul managed to address this in a jiffy! He is punctual and professional- a pleasure to have around I can’t recommend him enough!

Paul has been reshaping and clearing my garden borders which has involved removing ivy from a wall, digging up some small trees, taming the climbing plants and clearing and turning over the soil in order to plant or relocate new shrubs.

I can now see the small garden path which had been covered in weeds for years! The shrubs now have a chance to thrive and survive the winter. Throughout, he has been industrious and thorough in tackling each of the problem areas. He is also knowledgeable…

buddleia cut back
Paul came very promptly to quote for chopping our enormous budliea. His quote was very reasonable and he returned next day to carry out the work. Very professional, gave sound advice about other plants in the garden, did a great job and took all rubbish away. Also cleaned up very thoroughly afterwards. I would gladly have him back for more work and recommend him to friends. Thanks Paul!

May 2019. End of tenancy tidy up.
May 2019 Am absolutely delight with the job Paul done. Was quick, efficient and tidy our garden for our end of tenancy contract. Thank you very Much.

Simon
An excellent job done to a very overgrown garden. Hedges cut, trees re-shaped and all cuttings removed. Reliable, punctual, friendly and polite. Come with my full recommendations. Thank you very much

Pam, Lower Earley, Reading, October 2013
I can relax a little, now Paul is helping me to keep my Garden tidy and hopefully improve its quality. Not an easy challenge! Thank you Paul. Pam in Lower Earley

First class job! Really pleased!
We would highly recommend Paul as we are so pleased with our front garden. He provided an efficient, knowledgeable and professional service where we were very happy with the end result and all at a very reasonable price! Thank you Paul

Excellent experienced people.
Phoned Paul to quote for cutting a large conifer hedge in my daughters garden, he arrived on time and quoted a very fair price so we agreed a day to do the work. On the day he was prompt and set to work straight away and didn’t really stop for about 4 hours!! Everything was cleared away and he even used a blower on the lawn to remove the last pieces! Excellent bloke and would certainly use him again. Highly recommended.

On Time ,Very Tidy. October 2014
I Contacted Paul , After Seeing His Website And Arranged For A Call. Very Prompt Service Even Though I had Changed The Original Date. Our Garden Is Unloved , But Paul And His Team Arrived And Looks So Much Nicer, And Work so Tidy I have An Incentive To Work In It. Pauls Quote Was We Think Very Good For The Work Completed , and Have Already Made A Note In The Diary For the Next Visit . Thank you Final Note , Would, And Have Already Recommended Paul To A Friend.

Jay, Caversham Heights, Reading, October 2013
Thanks to  Tidy Gardens for the excellent job Paul did on our garden. We moved into a new house in September & the garden was a complete jungle, Paul came & cleared everything out, cut down trees, bushes and cleared the mess. He worked really really hard, was punctual, very polite & cheerfull. He left the place immaculate & filled us with confidence throughout. All in all I couldn’t be happier with the service that Tidy gardens provided. I wouldn’t hesitate to recommend Paul – extremely helpful … END_OF_DOCUMENT_TOKEN_TO_BE_REPLACED